A large monster in the form of a moth.

Despite differences in real life, in Dwarf Fortress, the giant moth is physically exactly like a giant thrips. It, too, lacks any attacks besides pushing. It has the same size, same bodyparts, same wrestling ability, same flying tag and same wings. These giant variations are even more similar to each other than their normal-sized types are; normal moths are significantly faster than normal thrips, but the giant varieties have the same speed. Even though it is quite fast, it is still not much of a threat. It is good for food and marksdwarf training, but not much else. They are also very short-lived, like all the other giant insects. 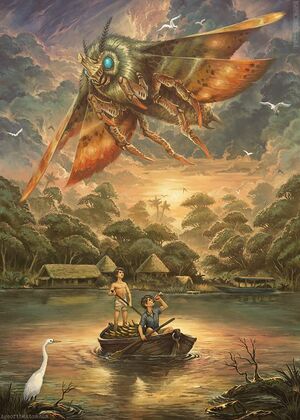 Still not the worst thing those two humans have seen.
Art by Josh Guglielmo
Retrieved from "https://dwarffortresswiki.org/index.php?title=Giant_moth&oldid=285533"
Categories:
Hidden category: