A person with the head, pincers and tail of a bark scorpion.

Bark scorpion men are humanoid versions of the common bark scorpion, and a species of animal people, found in savage deserts and tropical areas. They are a bit over half the size of dwarves and spawn in groups of 1-3 individuals. With a total of 6 arms (each with a hand) and 2 pincers, they can equip multiple items at once and also retain the poisonous sting of their animal counterparts, which causes pain on the victim when injected. The creatures themselves are additionally immune to pain, stunning, fear and paralysis, never need to sleep and possess extravision. All bark scorpion men are born with Legendary skill in climbing.

Like other savage animal people, bark scorpion men may occasionally join civilizations, becoming full-fledged citizens who may appear in your fortress as visitors or be playable in adventurer mode. If playing as a bark scorpion man, your stinger can be used to sting foes, which forces them into a prone state and applies a good amount of pain that will stun most enemies. The sting can force even undead into a prone state, but it will not stun them or even cost them a turn. Also, note that they cannot jump.

Some dwarves like bark scorpion men for their pincers and their stinging tail. 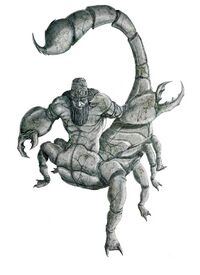 Not the friendly type.

Bark Scorpion Men are known to use their stinging tails as harpoons or hooks of a sort, and some have been observed to cry "Get over here!" when pulling in their prey. Some dubious tales report pyrokinetic powers and teleportation being among a Scorpion Man's abilities, but the lack of these attributes in any other creatures leaves scholars in denial.