A grey person with the head and tail of a gray langur.

Gray langur men are humanoid versions of the common gray langur and a species of animal people, found in a variety of savage biomes. They are a bit over half the size of dwarves when adults and spawn in groups of 5-10 individuals. They share the same thieving disposition of normal langurs, and their greater size in comparison to the animals may make them a threat to civilians who get into fights with them. All gray langur men possess Legendary skill in climbing.

Like other savage animal people, gray langur men may occasionally join civilizations, becoming full-fledged citizens who may appear in your fortress as visitors or be playable in adventurer mode.

Some dwarves like gray langur men for their social nature and their vocalizations. 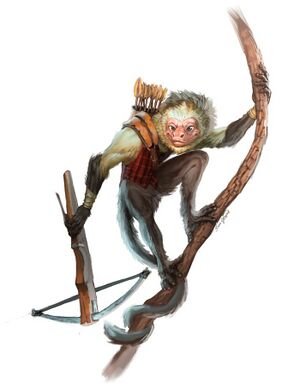 Still as thieving as a standard langur.
Retrieved from "https://dwarffortresswiki.org/index.php?title=Gray_langur_man&oldid=286521"
Categories:
Hidden category: