A large ape which lives in the tropical forests. It is quite intelligent and lives in large and complex social groups.

Bonobos are dwarf-sized apes who are rarely found inhabiting tropical shrublands and moist broadleaf forests, where they appear in groups of five to ten individuals. They are virtually identical to chimpanzees in all aspects but name; they are benign meanderers who will only attack dwarves if pushed beyond their limit and will generally simply avoid contact. All members of the species are born with Legendary skill in climbing.

Bonobos can be captured in cage traps and trained into valuable exotic pets. Being slightly smaller than dwarves, bonobos produce few returns when butchered, making using them as livestock a waste, considering their rarity. Bonobo children take two years to grow to full size, and ten years to reach adulthood. Like other apes, they are among the few wild animals in the game who can't naturally swim, and as such will likely drown if thrown into a body of water. 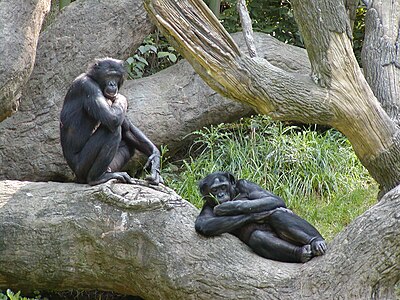 Admired for their antics.
Retrieved from "https://dwarffortresswiki.org/index.php?title=Bonobo&oldid=287885"
Categories:
Hidden category: