A person resembling a large rattlesnake with arms.

Rattlesnake men are animal people versions of the common rattlesnake, who can be found in any non-freezing savage region. They spawn in groups of 1-3 individuals and are generally content to keep to themselves, but like their animal versions, their bite possesses a strong syndrome which should be avoided. In terms of size, they are a little over half the weight of the average dwarf.

Rattlesnake men will attempt to attack your livestock, but not your dwarves.

Some dwarves like rattlesnake men for their warning rattle. 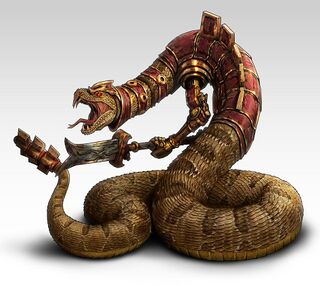