A humanoid with the head and stripes of a badger.

Badger men are animal people variants of the common badger who inhabit savage temperate forests and taigas. They spawn in groups of anywhere between 5-10 individuals and retain the original animal's bad temper, occasionally going into a fit of rage and attacking nearby creatures. In terms of size, they are over half the weight of the average dwarf, and as such can cause significant damage in a confrontation with an unarmed civilian or pet.

Like other savage animal people, badger men can join civilizations, become historical figures, appear as visitors and be playable in adventurer mode.

Some dwarves like badger men for their underground communities and their striped faces.

It is well known that badger men prefer walls made from red materials. 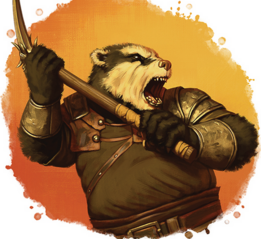 Best not to disturb when they work...
Retrieved from "https://dwarffortresswiki.org/index.php?title=Badger_man&oldid=286701"
Categories:
Hidden categories: