A giant bear-like creature found in the wildest parts of the world. It has striking black and white fur.

Though considerably dangerous, gigantic pandas can be a great asset to your fortress. Consider embarking near a temperate forest, on the chance that you might encounter this creature. It can be considered a must-cage creature for its tremendous size, value and train-ability (for hunting or war).

However, like their smaller panda relatives, trained gigantic pandas must graze on bamboo, and given their immense size, they must graze constantly to avoid starvation, making them a very poor choice for training and livestock. Their butchering returns are twice as valuable as common creatures, but their dietary requirements make gigantic pandas a better target for hunting than husbandry.

It should be noted that this creature is considered gigantic, not merely giant. Like the gigantic squid and gigantic tortoise, this is presumably to avoid confusion since "giant panda" is the formal name of normal pandas.

Some dwarves like gigantic pandas for their enormous size, their striking coloration, their gigantic fluffy heads and bellies and their lazy nature. 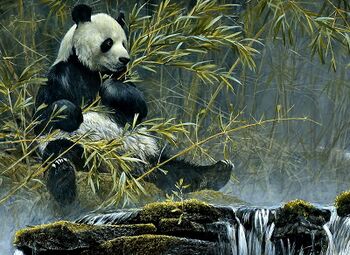 Its hunger can clear out an entire bamboo field.
Retrieved from "https://dwarffortresswiki.org/index.php?title=Gigantic_panda&oldid=285690"
Categories:
Hidden category: