A large anaconda with the torso and arms of a man.

Anaconda men are animal people variants of the common anaconda who can be found in savage tropical wetlands. They spawn in groups of 1-5 individuals and may injure dwarves who attempt to provoke them. In terms of size, they are a little larger than humans.

Like other savage animal people, anaconda men can join civilizations, become historical figures, appear as visitors and be playable in adventurer mode.

Some dwarves like anaconda men for their great size. 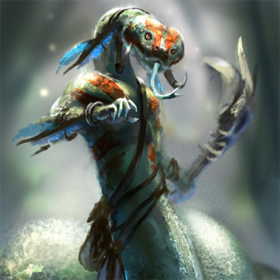 An anaconda man as a shaman.
Art by conorburkeart
Retrieved from "https://dwarffortresswiki.org/index.php?title=Anaconda_man&oldid=286675"
Categories:
Hidden category: