Mountain gnomes are weak humanoid creatures that appear on good mountainous maps. Their intelligence is on par with dwarves and other sentient creatures, but they lack the ability to communicate verbally, one possible reason they haven't formed a civilized society. They're a rather long-lived race, with the oldest ones living up to 250 years. In adventurer mode, they're only active during the day.

If you leave booze out in the open, they will steal it, leaving your dwarves dying of dehydration, but otherwise, they are "harmless", fleeing if confronted (to the point of running off a cliff if necessary). Given their small size, they pose no physical threat to any dwarf and can be easily killed by anyone who isn't unconscious, though they are known to scare animals and civilians away when approached.

Gnomes can be easily trapped by placing a single forbidden barrel of booze in a small stockpile and surrounding the barrel with cage traps. Since gnomes often travel in groups, several layers of cages should be used so that the bait stays untouched. Gnomeblight is extremely toxic to mountain gnomes, causing necrosis if somehow applied to them.

Their evil counterparts are the dark gnomes.

Some dwarves like mountain gnomes for their ability to hold liquor. This is well-founded, as they have an inebriation dilution factor of 500, allowing them to guzzle down entire barrels of alcohol with next to no effect. 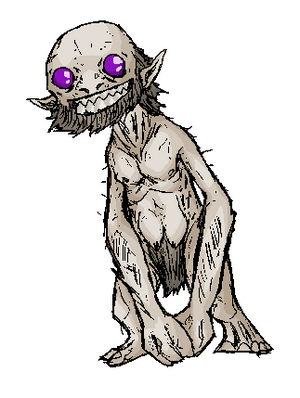 Admired for its ability to hold liquor.
Art by Fault

There are many rumors of Gnomes holding the ability of speech. It is said they only speak when out of the presence of other intelligent creatures.

One story follows a gnome that is repeatedly laughing. The gnome then makes an effort to distinguish itself from that of a goblin or an elf. It does so through a variety of actions, from hopping to the left to walking hunched over. The gnome then proceeds to horrifyingly declare, "I'm a gnome, and you've been, Gnomed!". This tale strikes fear into the hearts of many young dwarves and humans alike.