A person with the head and tail of a fox.

Fox men are animal people variants of the common fox who inhabit savage temperate forests and taigas. They spawn in groups of 2-10 individuals and are generally content to keep to themselves. In terms of size, they are roughly half the weight of the average dwarf.

Like other savage animal people, fox men can join civilizations, become historical figures, appear as visitors and be playable in adventurer mode. 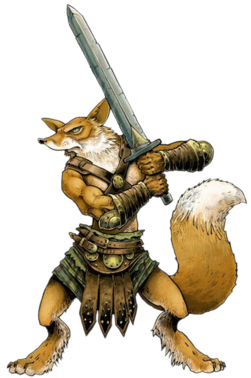 They do not seem to be great at piloting fighters, contrary to popular belief.

The culture of fox men places a high value on tradition, family, and national pride. Their preferred economic model is free-market capitalism.

They are not ox men. This is an easy mistake to make if you're not paying attention. If in doubt, ox men tend to have stronger body odor.

Fox men prefer to settle conflicts with other fox men by one on one unarmed combat on even ground. They consider conducting these duels with weapons or on ground that is not perfectly flat to be unthinkable.