A tiny venomous snake found in the woods and swamps.

Copperhead snakes are tiny, solitary, venomous creatures who inhabit temperate broadleaf forests and swamps. They can inject a poison that causes nausea and pain, and swelling of the affected area, which wears off after not too much time, though they're typically too small to successfully puncture a dwarf's skin. Like other snakes, they continuously grow through their entire lives, reaching their max size at the age of 20, though some copperheads may die of old age as soon as they reach the age of 10. Even when fully grown, however, they are among the smallest creatures in the game who aren't vermin.

Copperhead snakes can be captured in cage traps and trained into exotic pets. They are born adults and as such can't be fully tamed. They are too small to give anything but a skull when butchered and, unlike most reptiles, they give live birth instead of laying eggs, making them entirely unusable for a meat industry. A totem made out of a copperhead's skull, however, will be twice more valuable than a normal one.

Some dwarves like copperhead snakes for their attractive scale patterns. 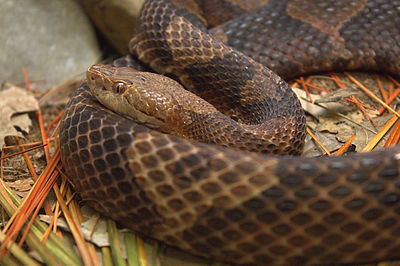