A small reptile with a tell-tale rattle and vicious bite that leads to a quick death.

Rattlesnakes are small, solitary, venomous creatures found in all non-freezing biomes. Its venom causes pain, nausea, blisters, swelling, and bruising in the short term, and severe localized necrosis in the long term. While small, they can easily kill children, and as such should be approached with caution or dealt with via ranged weapons like crossbows. Like other snakes, they continuously grow through their entire lives, reaching their max size at the age of 20, though some rattlesnakes may die of old age as soon as they reach the age of 10.

Rattlesnakes can be captured in cage traps and trained into exotic pets. They are born adults and as such can't be fully tamed. While their uses are pretty limited, given their small size and few butchering returns, the idea of disposing of goblin prisoners via rattlesnake pits does sound quite tempting (if only to watch them slowly succumb to poison). Products made from rattlesnake parts are worth twice more than those made out of common animals. Unlike most reptiles, they give live birth instead of laying eggs. 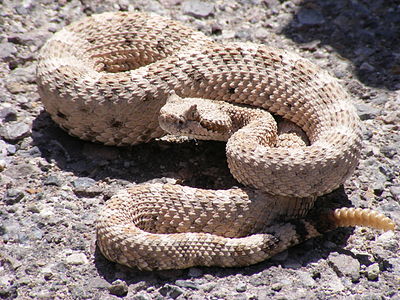