A large monster in the shape of a beetle.

Giant beetles are the giant animal variant of the common beetle, found in most savage biomes where they appear one at a time. Despite its disposition of being a "giant" creature and being about three times the size of a dwarf, they are benign and will be of no threat to your citizens, fighting back only when forced to with pushes and wrestling. All giant beetles possess Legendary skill in climbing.

Giant beetles can be captured in cage traps and trained into exotic pets, possessing the standard giant creature value. They provide a high amount of meat when butchered thanks to their many legs, but due to only living up to 1 year, they cannot feasibly be used in a meat industry. Like other giant animals, giant beetles are exotic mounts, but their tiny lifespan means this generally sees no use.

Some dwarves like giant beetles for their protective shells.

Contrary to dwarven legend, giant beetles are (unfortunately) not equipped with horns and cannot grow thick, shaggy beards similar to those of a dwarf's. 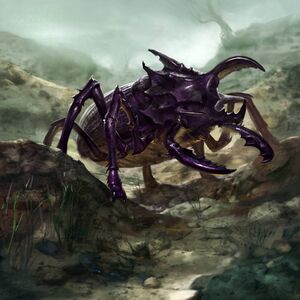