A large person with the head of a grizzly bear.

Grizzly bear men are animal people variants of the common grizzly bear who can be found in savage temperate forests and taigas. They spawn in groups of 2-10 individuals and can be a threat to a fortress, as they are over twice the size of a dwarf and can easily maul one to pieces with their teeth and claws.

Some dwarves like grizzly bear men for their strength.

Bear men are smarter than the average bear. Bear men have been seen wearing backpacks containing large birds, which some dwarves say are able to lift the bear in flight. 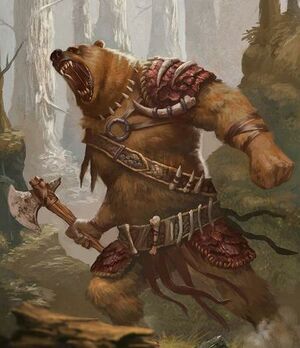