A huge monster in the shape of a black bear.

Giant black bears are the giant animal variant of the common black bear, found in savage taigas and temperate forests. They are solitary creatures, and only three may spawn on a given map. With a [LARGE_PREDATOR] token and a willingness to steal food and booze from your stockpiles, these creatures can pose a threat even to well-prepared fortresses, as they are 18 times the size of the average dwarf (roughly the size of a water buffalo).

The best way to prevent them from stealing your food and drink is to use cage traps. Once trapped, these animals can be trained into exotic pets, possessing the default giant animal value. While they can't be trained for war or hunting, they can still make powerful defense animals, especially if they're pastured in the correct area. Like other giant animals, they are considered exotic mounts.

Some dwarves like giant black bears for their strength. 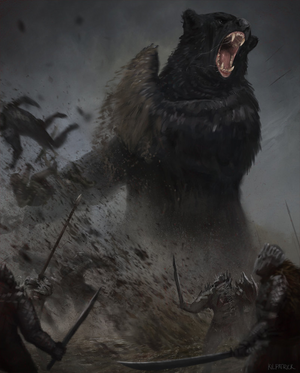 "Embarking in this savage biome was your idea!"
Art by JMKilpatrick
Retrieved from "https://dwarffortresswiki.org/index.php?title=Giant_black_bear&oldid=285300"
Categories:
Hidden category: