A huge monster the shape of a badger. It is ferocious in combat.

Giant badgers are giant animal variants of the common badger, found in a wide variety of savage biomes. Like the regular badger, these animals are prone to rage and may randomly flip out in a berserk fury, attacking anything unfortunate enough to cross their path. Giant badgers are roughly the size of an elk, or 5 times larger than a dwarf, and as such will make quick work of civilians and a poorly trained, poorly equipped militia. Like their common cousins, they also tend to spawn in large clusters of 4-12 individuals, making them exponentially more dangerous if multiple badgers decide to get peeved together close to your dwarves.

Giant badgers can be captured in cage traps and trained into exotic pets, possessing the default giant animal value. Their large size translates into a good amount of products if they are butchered, and you may also be inclined to use these huge, angry mustelids in your fortress defense. Like all giant animals, they are considered exotic mounts.

Some dwarves like giant badgers for their underground communities and their striped faces.

Giant badgers used to be the king of beasts of 0.31.25 due to appearing frequently in temperate biomes and ripping apart young fortresses mercilessly. Now they are noticeably less common.

Giant badgers spawn in small groups of 4-12 individuals, apparently harmless - but this is merely a facade. As fury takes them, they will fall unto your fortress in a fury of claws and teeth.

Be warned. They are still here. Lurking. 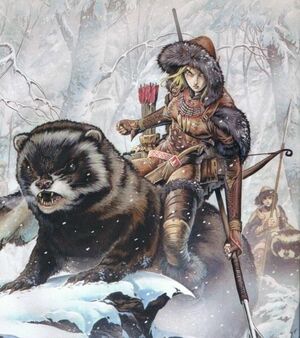