Yaks are large, milkable domestic animals. They can serve as pack animals and are a common sight in merchant caravans. They may be either brought on embark or found in wild populations in mountains. The males of the species are known as yak bulls, while the females are known as yak cows.

Yaks are the second largest of all domestic livestock (losing only to water buffalos), making them one of the best domestic creatures for a food industry. They provide significant food, fat and bones when butchered, and also serve as a source of horns. Yaks eat a lot of grass, so it may be in a player's best interest to give them a separate pasture, so they don't hog all the grass from other animals in a given area. 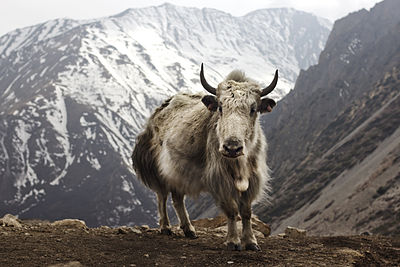 Admired for its shaggy hair.

Some Yaks are dumber than dwarves, there are rumors about yaks climbing the trees and then starving to death while unable to get down.