A person with the head of a dingo.

Dingo men are animal people variants of the common dingo who can be found in most savage biomes. They spawn in groups of 3-10 individuals and may pick fights with dwarves who provoke them, inevitably leading to injuries, but most dwarves should be able to defeat a dingo man one-on-one. They are close to dwarves in size, but overall smaller.

Despite what some forms of media may portray, there are no dingo men infused with crocodiles at the genetic level. They also do not antagonize humanoid bandicoot men. They also do not operate large flamethrowers. It is debatable whether they speak in an Australian accent or not. 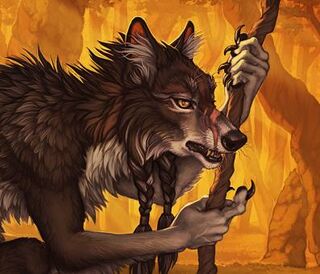 Only speaks in an Australian accent if comically appropriate.
Retrieved from "https://dwarffortresswiki.org/index.php?title=Dingo_man&oldid=285297"
Categories:
Hidden categories: