Sheep are common domestic livestock available to dwarf and human civilizations. Sheep can be sheared once every 300 days to yield wool, which can be used to make low-value cloth. In addition to the standard meat industry products, sheep also supply wool when butchered. Rams (male sheep) have two horns which they use for defense (and which your dwarves can use for crafting); ewes (female sheep) can be milked, and that milk can then be cooked or made into cheese. Until grown up, their offspring of both sexes are called lambs. 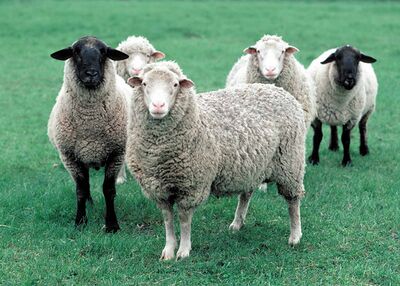 Admired for its wool.
Retrieved from "https://dwarffortresswiki.org/index.php?title=Sheep&oldid=285973"
Categories:
Hidden category: