A green person with the head and arms of a mantis.

Mantis men are animal people variants of the common mantis who can inhabit most savage biomes. They spawn in groups of 1-3 individuals and are generally content to keep to themselves, but may pick fights if provoked. In terms of size, they are a little over half the weight of the average dwarf. All mantis men are born with Legendary skill in climbing.

Like other savage animal people, mantis men can join civilizations, become historical figures, appear as visitors and be playable in adventurer mode.

Some dwarves like mantis men for their grasping legs and their predatory nature.

For the beta testers for mantis men, there was good news and bad news. The bad news is those copies of the beta were postponed indefinitely. The good news is we don't have to deal with an army of mantis men. So take arms and kill any you happen to see on your map.

Known to carry monster condoms for their magnum dongs.

Not telepathic, counter to popular opinion.

Can fly to fuel nightmares. 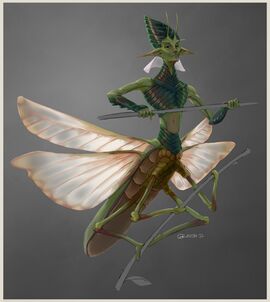 You'll always be in a mantis' thoughts and prayers.
Art by Tommy Graven
Retrieved from "https://dwarffortresswiki.org/index.php?title=Mantis_man&oldid=287033"
Categories:
Hidden categories: