A gigantic monster in elephant form.

Giant elephants are the even more massive cousins of the common elephant, found in savage tropical forests and shrublands. 666 times heavier than a dwarf, they are truly enormous to say the very least; not only are they eight times the size of regular elephants, they are even larger than megabeasts like the dragon or roc. They are by far the largest land-dwelling creatures in the game and are joint second in size (along with the giant orca) only to the aquatic giant sperm whale.

As big as they are, giant elephants are as vulnerable to cage traps as anything else, and like normal elephants, they can be trained into pets. Like their smaller counterparts, giant elephants are trainable for both war and hunting. If you can train one, they make the best defense animals in the game; not much can stand against a giant elephant, let alone multiple. They also offer an almost unparalleled bonanza of butchering returns.

Undead Giant Elephants will likely be one of the most fun creatures you will ever encounter. Consider use for Clown hunting

Some dwarves like giant elephants for their strength, their amazing trunks, their calves' spirited antics, their tusks, their great weight, their social behavior, their flappy ears, their uprooting of trees, their aggressive sparring, their trumpeting, their tool use and their self-awareness. 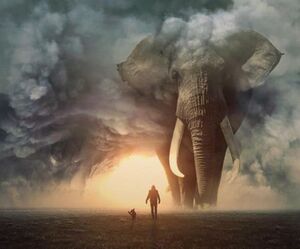 "Someone get the butcher!"

According to legend, in a great siege several humans mounted fortresses on the backs of these great beasts, and rode them into battle as weapons of war.

Despite their great size, slaying a giant elephant still only counts as a single kill.