A large person with the head of a black bear.

Black bear men are animal people variants of the common black bear, who can be found in savage temperate forests and taigas. They spawn in groups of anywhere between 2-10 individuals and retain the thieving disposition of their animal counterparts, running off with your food and drinking your booze whenever they can. They are significantly larger than a dwarf and can easily shred a peasant to pieces if provoked.

Like other savage animal people, black bear men can join civilizations, become historical figures, appear as visitors and be playable in adventurer mode.

Some dwarves like black bear men for their strength. 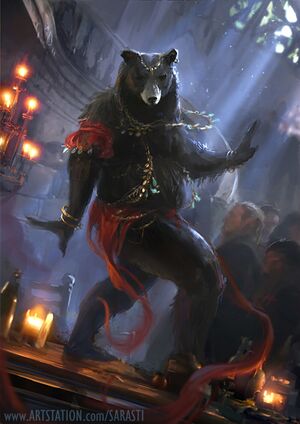 Pretty much invented the "bear boogie" that elves tried to copy.
Art by Sarasti
Retrieved from "https://dwarffortresswiki.org/index.php?title=Black_bear_man&oldid=286730"
Categories:
Hidden category: