A large monster taking the shape of a weasel.

Giant weasels are much larger versions of the common weasel, found in most savage biomes. While the common animal is one of the smallest in the game, the giant variant is about three times bigger than a dwarf, but they are generally harmless due to being benign. Like normal weasels, they are solitary, don't spawn during the winter and their young are called kits.

Giants weasels may be captured in cage traps and trained into pets. They're large enough to actually produce food when butchered, giving returns equivalent to a mule in quantity. Like their common counterparts, giant weasels are very short-lived, living no more than 2-3 years, making keeping them around for extended periods of time a questionable decision. Giant weasels are exotic mounts and may be witnessed being used by elves during sieges.

Some dwarves like giant weasels for their long bodies and their short legs. 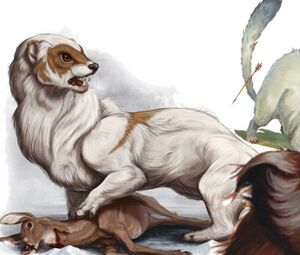