A large mammalian herbivore living in cold climates. It has large antlers and sought-after fur.

Reindeer are very versatile domestic animals, providing not only a respectable amount of meat, but also horns and hooves that can be used for crafting. They also produce milk, which can be cooked directly or used to make cheese. While reindeer require a pasture to survive, they need less grass than most other large herbivores, making them a great choice for the food industry. They may be brought on embark or found in wild populations in taigas and tundras. 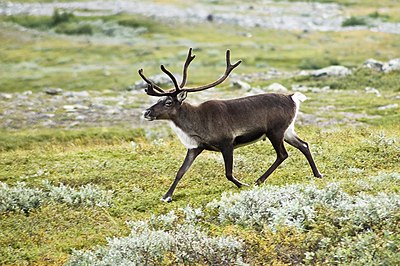 Admired for its large herds.

It has been rumored that some reindeer are generated with red noses. It has yet to be tested if this is somehow related to Goblin Christmas. It has also been rumoured that due to the relation of these rare specimens to fat humans and elves, the red-nosed sub-species has been systematically killed off by the dwarves.