A person with the head of a deer.

Deer men are animal people variants of the common deer who can be found in savage temperate forests and taigas. They spawn in groups of 1-5 individuals and are generally content to keep to themselves. In terms of size, they are almost twice the weight of a dwarf, leading to confrontations between them being heavily in the deer man's favor unless the dwarf is properly armored and equipped.

Their deadliness and cruel nature rivals that of moose men. 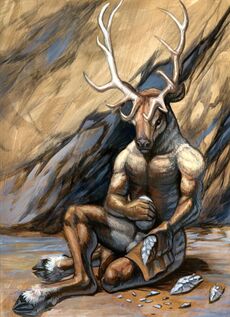