A huge monster in the shape of a fox.

Ancient human tales tell of a vicious giant fox created by one of the human deities. It is much greater than even a giant elephant, possessing nine tails and consisting of unusual material that makes it virtually indestructible. It is also capable of firing an explosive projectile from its mouth, and it equally despises all mortal beings. Thankfully such tales are mere fiction, but Armok Himself would likely be impressed by the idea, so human imagination is to be commended. 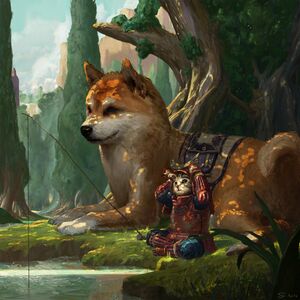 Not that bothered by cat people; they ain't so bad.
Art by S - Lpis
Retrieved from "https://dwarffortresswiki.org/index.php?title=Giant_fox&oldid=285335"
Categories:
Hidden categories: