A person with the carapace and head of a beetle.

Beetle men are animal people variants of the common beetle who can inhabit most savage biomes. They spawn in groups of 2-5 individuals and are generally content to keep to themselves, but may pick fights if provoked. In terms of size, they are a little over half the weight of the average dwarf. Like normal beetles, they have a pair of wings but are unable to fly with them. All beetle men are born with Legendary skill in climbing.

Like other savage animal people, beetle men can join civilizations, become historical figures, appear as visitors and be playable in adventurer mode.

Some dwarves like beetle men for their protective shells. 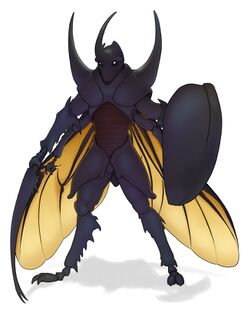 Sort of "comes with" armor.

If allowed residence in a fortress, Beetle men may form immensely popular rock 'n roll bands. These bands have been known to cause a strange mood that primarily affects young female dwarves.