A large monster in the shape of an axolotl.

Giant axolotls are super-sized versions of the common axolotl who inhabit savage tropical lakes. While their original counterparts are just vermin, these creatures are over 3 times bigger than a dwarf. They spawn individually and not particularly aggressive, but are not benign and will attack other creatures (including dwarves) who provoke them, potentially killing them.

Giant axolotls can be captured in cage traps and trained into pets, possessing the standard giant creature pet value. They are born adults and cannot be permanently tamed. They produce an adequate amount of products when butchered (comparable to a cow), and as such may serve as a choice for novelty livestock. They are also fairly long-lived compared to most giant vermin, and since they're born as fully-sized adults, they can start producing more of themselves fairly quickly, provided a breeding pair is obtained. They are exotic mounts and may be witnessed being ridden by elves during sieges. 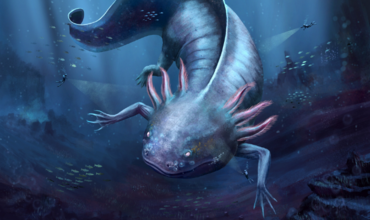 Too cute to be considered a vermin.
Art by Matthieu Papy
Retrieved from "https://dwarffortresswiki.org/index.php?title=Giant_axolotl&oldid=287692"
Categories:
Hidden category: