Moose are large herbivorous animals who inhabit taigas and temperate forests, where they spawn one at a time. They are benign meanderers and generally avoid confrontation, and as such a dwarf hunter will typically emerge victorious when trying to hunt them. Moose possess significant sexual dimorphism, with males being over 1.5x larger than females and having access to a gore attack. Male moose are called bull moose, while females are cow moose and their newborns are moose calves.

Moose can be captured in cage traps and trained into fairly valuable exotic pets. Given their large size, they make prime targets for a meat industry and a good choice for a breeding program. The returns shown to the right are those of a male moose - a female will give less due to being smaller. Trained moose are grazers and therefore must be kept in a pasture in order to keep them fed and alive. Moose are exotic mounts, and may be seeing being ridden by humans during sieges.

Some dwarves like moose for their broad antlers and their large size. 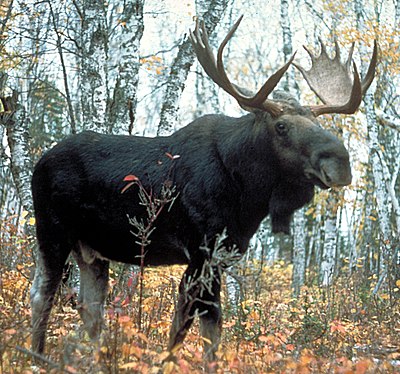 Admired for its broad antlers.

Template:D for Dwarf The Moose is capable of bringing down the toughest adventurers and soldiers, with hooves that cave in skulls with frightening ease. This creature has been dubbed the Scourge of Canada by survivors of such horrific encounters.

Mooses have also known to bite female dwarves attempting to carve their initials in their flanks. No realli!