A long-eared person with the head and tail of a hare.

Hare men are animal people variants of the common hare who can be found in savage temperate grasslands and savannas. They spawn in groups of 1-5 individuals and are generally content to keep to themselves. In terms of size, they are a little over half the weight of the average dwarf.

Some dwarves like hare men for their long ears and fluffy tails.

Some hare men are known to fool hunters with their wit and guile, they also have a penchant for wisecracks and munching on carrots. Even during "rabbit season".

One case reports an ambitious hare woman becoming a citizen of a dwarven fortress and ascending the ranks until she became a guard, while also getting a pardon for a fox man and letting him join. 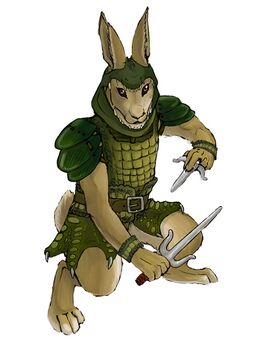