Coyotes are small and rare canine animals found in packs of 2-10 in most biomes, except tropical and freezing ones. Half the size of a dog or wolf, coyotes aren't aggressive and will generally avoid dwarves despite being carnivorous, preferring to simply meander around the area aimlessly. A juvenile coyote is called a pup.

Coyotes can be captured in cage traps and trained into exotic pets. They aren't trainable for war or hunting and give roughly less returns than dogs when butchered, but their parts are worth twice more than those of common animals. Due to their low frequency rate, however, they make poor choices for livestock, as you may not even encounter them at all. 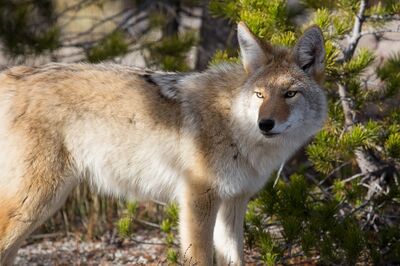