A person with the head and tail of a rhesus macaque.

Rhesus macaque men are humanoid versions of the common rhesus macaque and a species of animal people, found in savage temperate biomes. They are only a little over half the size of an adult dwarf, being unlikely to pose a threat to a civilian's life, though they retain their animal brethren's thieving habits; they can and will steal food and items in their reach, and due to being larger than a normal macaque, they may cause actual harm to dwarves who try to fight them.

Like other savage animal people, rhesus macaque men may occasionally join civilizations, becoming full-fledged citizens who may appear in your fortress as visitors or be playable in adventurer mode.

Some dwarves like rhesus macaque men for their mischief. 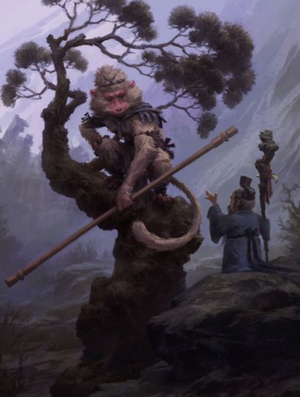