A large solitary feline. It is found most often in dense vegetation, ambushing its prey.

Cougars are somewhat rare solitary large cats that live in shrub- and woodlands. Though equal in size to the average dwarf, they'll rarely attack your dwarves, preferring instead to wander around far from your fortress. Cougars can be captured and trained by an animal trainer. While cougar parts are worth twice as much as domestic animal parts, it would be very difficult to establish a breeding program unless the elves happen to bring a breeding pair. Unfortunately, unlike a lot of big cats they cannot receive war/hunting training (although this is easily remedied with some modding). 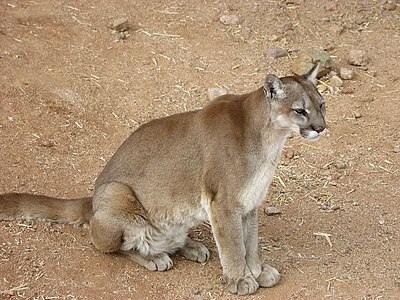 Admired for its cunning.

Later in the game, cougars might appear more frequently, depending on how many young male dwarves your fort has.