A person with the head and arms of a brown recluse spider.

Brown recluse spider men are humanoid versions of the common brown recluse spider and a species of animal people, found in savage temperate broadleaf forests. They are a little over half the size of an adult dwarf and appear in groups of 1-3 individuals. Their existence is marked by webs scattered across the surface, but the creatures themselves are uncommon to encounter.

They do not feel pain or fear, and have three pairs of arms and a moderately venomous bite that is usually deflected by clothes, but is quite effective at incapacitating animals with pain. Additionally, they cannot disturb or be caught in webs.

Like other savage animal people, brown recluse spider men may occasionally appear in your fortress as visitors, or even join civilizations, becoming full-fledged citizens.

Some dwarves like brown recluse spider men for their venomous bite.

As adventurers, besides the advantages listed above, they have the advantages of no need for sleep, and their 6 arms allows them to equip up to five shields and a weapon if shield-user skill is selected at gen. They can actually harvest webs and turn them into thread; an empty hand must be available to hold the web in order to convert it into thread.

The downsides include a non-standard and rather small body size, meaning most found armor will not be useful, and strength will be at a penalty. Additionally, brown recluse spider men are completely unable to swim or consume plant food (e.g. berries) due to being carnivorous. 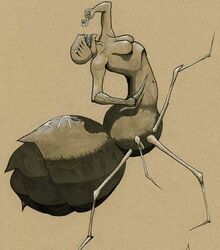 Much smaller than pictured.

The nature of the animal person creature variation template means that they cannot, in fact, do whatever a spider can.