Dingoes are animals found in non-freezing biomes, uncommonly appearing in packs of 3-12 individuals. Meandering predators, slightly smaller than a common dog, they may attack your livestock, as well as your dwarves, but are unlikely to kill civilians unless they're alone. They are considerably more common in adventurer mode, however, acting as a more numerous and annoying version of wolves. They possess thick fur which provides them with increased insulation compared to most other animals, and their newborns are referred to as pups. 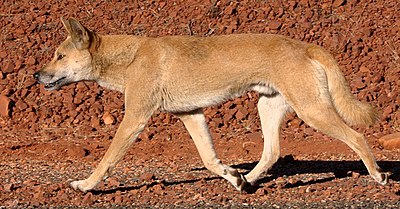 The wildly popular Dwarf "Jurist Olivine" has, in his book series Next Week Right Now, popularized the notion that you should never call a Dingo to look after your baby. The Dingo has big conflicts of interests.