A large mammalian herbivore. It is powerfully built and has long curved horns.

Water buffalos are the largest of all domestic animals, roughly twice the size of a standard cow. They are a common choice for trader's pack animals, and dwarven settlers may bring one or more water buffalos to pull their wagons on embark. Wild water buffalos may appear as wandering animals in tropical wetland biomes.

Producing up to four times the butchering returns of an ordinary cow, they can feed 7-14 dwarves for an entire year. Water buffalo cows can also be milked for additional sustenence. However, water buffalos are grazing animals; they require a large pasture to survive. Because of their voracious appetites, water buffalos are a challenging choice for livestock, and their large size makes them dangerous in an overcrowded pasture.

Some dwarves like water buffalos for their water wallowing. 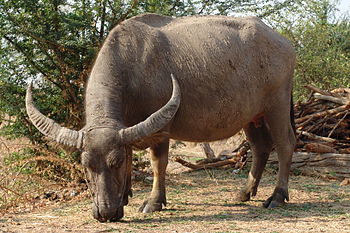 Admired for its water wallowing. 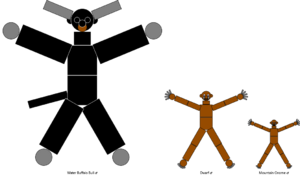 Water buffalos possess exceptional martial capabilities when defending settlements, but these abilities only manifest when they are not being watched.