A person with the head of a wild boar.

Wild boar men are animal people versions of the common wild boar, who can be found in almost all savage biomes. They spawn in groups of 5-10 individuals and are generally content to keep to themselves, but may fight back if provoked by approaching civilians. In terms of size, they are slightly larger than the average human.

Like other savage animal people, they can join civilizations, become historical figures, appear as visitors and be playable in adventurer mode. Wild boar men are among the few animal people capable of wearing human-sized armor while retaining the primary advantage most animal men have of being larger than humans.

Some dwarves like wild boar men for their tusks and their ferocious charges.

It has been said that, in evil regions, zombie wild boar men will spawn. They wield ☼Golden short swords☼ and will retaliate in packs if provoked. 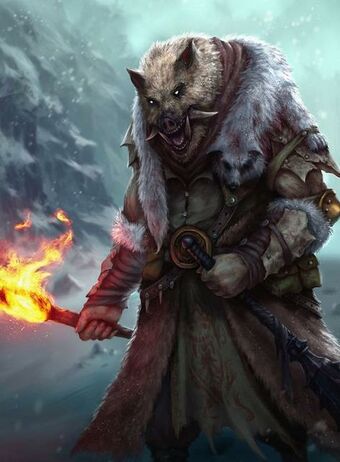