This page is about wolf people, not to be confused with a werewolf a type of werebeast.
A person with the head and tail of a wolf.

Wolf men are humanoid versions of the common wolf and a species of unremarkable animal people, found in a variety of savage biomes. They are about as heavy as a dwarf, being only slightly smaller, and should pose no real threat to a civilian unless provoked. They are particularly rare to encounter compared to most animal men.

Like other savage animal people, wolf men may occasionally join civilizations, becoming full-fledged citizens who may appear in your fortress as visitors or be playable in adventurer mode. 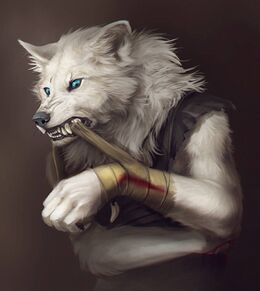