A huge ape found in the forest. It lives in small groups eating plants. The groups are lead by a large dominant male with a silver back.

Gorillas are large and rare creatures found in a number of tropical wetlands and moist broadleaf forests, where they appear in groups of 5-10 individuals. While over twice the size of the average dwarf, gorillas are benign meanderers who will typically flee if confronted, but may severely injure or even kill civilians if cornered and enraged. Like other species of ape, gorillas are among the few wild animals in the game who aren't innate swimmers, and as such will likely drown if forced into a body of water. All members of the species are born with Legendary skill in climbing.

Gorillas can be captured in cage traps and trained into valuable exotic pets. Due to their rarity in the wild, consider trying your luck with elven caravans, who may occasionally bring tame gorillas for trading. A trained gorilla doesn't require any grazing and can be further turned into a war or hunting beast, allowing you to put their size to use in your military. If you manage to obtain a breeding pair of gorillas and decide to breed them, note they take 10 years to reach adulthood (though they are fully grown by the age of 2), considerably longer than most other animals in the game, and likely longer than you'll be willing to wait to turn them into war beasts or livestock. 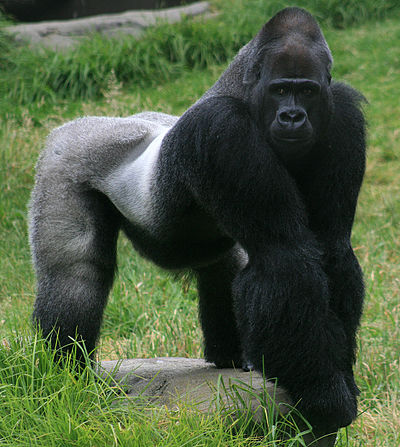 If you kill a gorilla after it grabs a child, prepare for a tantrum spiral.