A small mammal with a leathery hide. It can roll into a ball to escape predators.

Armadillos are small, solitary animals who inhabit most tropical biomes. A bit larger than your average cat, they're benign meanderers who do little but wander around aimlessly. When threatened, an armadillo can and will curl up into a ball; in this state, they will neither move nor attack, making them similar to a giant tortoise that has retracted into its shell. Male armadillos are called boars, while females are sows and infants are pups.

Armadillos can be captured in cage traps and trained into low-value exotic pets. They don't provide much food or bones when butchered due to their fairly small size, but do provide you with a shell that can be used by your bone carvers.

Some dwarves like armadillos for their thick, bony armor plates. 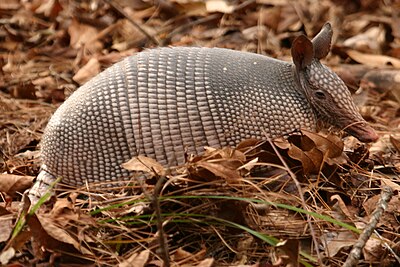