An evil humanoid with a long tail, black spiky fur and a twitching nose. It lives far underground.

Rodent men are one of the many underworld tribal races of animal people, living on any cavern level milling around piles of meat and tanned hides. They stand at roughly the size of an adult dwarf. Despite their description, they are a separate species from the rat man.

Like many underground races, the danger of rodent men is not to be found in their wooden weapons, but in the substances smeared on them - rodent men use many poisons, some of which can be deadly. They will launch group attacks on your fort, though unlike other animal people, they will not path through water to reach your dwarves. These attacks can be quite large, even comparable to sieges, and may include pets or mounts such as elk birds, giant olms, or giant cave swallows, the latter of which permits a flying rodent man blowgunner to shoot dwarves from above, beyond the reach of melee fighters. Rodent men riding elk birds are significantly faster than dwarves and may require more creative methods to defeat. However, they typically wear apparel of cloth or leather, so they can be easily dispatched in large numbers by a trained dwarf with metal gear, even copper. Much of the vanquished rodent men's clothing can be worn by dwarves due to their similar size. A repelled rodent man attack provides many blowguns and darts which dwarves can use, though the weapon is of questionable utility. Despite their description, they do not possess the [EVIL] token and are not any more malevolent than any other race of animal people.

In adventurer mode, rodent men can be found swarming at catacombs under temples, and their lack of armor may make them attractive targets for training one's combat skills.

Some dwarves like rodent men for their terrifying features. 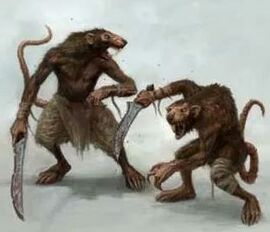 While many claim to have seen rodent men with their own eyes, any self-respecting scholar knows that they're but an unproven rumour to scare little dwarven children. The very possibility that a society of rodent men can live right under dwarven feet is preposterous.