A large monster in the shape of a chinchilla.

Giant chinchillas are giant animal variants of the common chinchilla who inhabit savage mountains. They spawn in groups of 3-5 individuals and will flee if confronted by hostiles such as hunters, despite being about three times the size of the average dwarf.

Giant chinchillas can be captured in cage traps and trained into exotic pets, possessing the default giant animal value, and producing a decent amount of returns when butchered. Like all giant animals, they are considered exotic mounts, though their restriction to mountain regions means you are unlikely to ever see one being used as such. 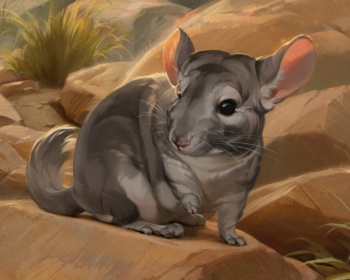 "They stop being cute when they reach a certain size."
Art by Mari-Liis Kirsimägi
Retrieved from "https://dwarffortresswiki.org/index.php?title=Giant_chinchilla&oldid=285314"
Categories:
Hidden category: