A medium-sized herbivore that lives in the high mountains, able to navigate the slopes despite its hooved feet.

Mountain goats are wild animals who may be found inhabiting mountains. They appear in groups of 1-4 individuals and meander around the area, minding their own business. They are benign and will normally flee from dwarves, but may rarely defend themselves with bites and kicks. A baby mountain goat is called a mountain goat kid.

Mountain goats may be captured in cage traps and trained into pets. In terms of size and value, mountain goats are identical to common goats and as such perform the same way in a meat industry, though unlike their domesticated cousins, they don't produce milk. Like domestic goats, a trained mountain goat will require a pasture to survive.

Some dwarves like mountain goats for their beards, their long horns and their surefootedness.

Despite the name (and similarity in Dwarf Fortress), mountain goats are not true goats (members of the genus Capra). Instead, they are a more distant relative on par with the sheep and the muskox. 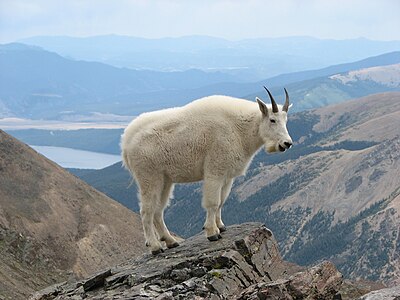 Admired for their beards.