A huge monster in the form of a snail.

Giant snails are predictably quite slow, as large as a grizzly bear and generally harmless. They are a good source of meat, fat, and especially shells (mostly for artifact requirements) in a pinch. They can cripple and may kill an unarmored dwarf with their push attacks, though, so you might want to send basic militia or a marksdwarf to hunt it. Giant snails can be tamed, but they are genderless and will not breed.

Like standard snails, giant snails can be found in every non-freezing savage biome. They may occasionally appear as mounts during a siege, but only fools would ride into battle on something as slow and relatively harmless as a giant snail. 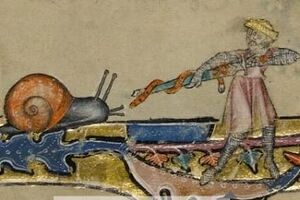 This is an image of a giant snail and a human. The giant snail is striking a menacing pose. The human looks terrified.

Humans are known to decorate their codices with images of this fearsome creature, indicating that this beast may have once been among the kings of beasts in the distant past.