The giant desert scorpion was a rare, large, aggressive and dangerous creature found in most savage desert biomes - the above-ground equivalent of the giant cave spider. As opponents, they were equivalent to blind cave ogres in lethality, and could appear in groups of anything from 1-3 mayhem-minded individuals. Giant desert scorpions were predatory, meandering killing machines. They would roam over long distances seeking prey, meaning they would eventually find your fortress and start stinging dwarves. Unlike other giant creatures, they never possessed normal and humanoid equivalents. All giant desert scorpions were born with Legendary skill in climbing.

The reason they were considered such a big threat was because of their stingers; giant desert scorpions were capable of injecting a neurotoxin which caused necrosis of the brain and nervous system, resulting in instant death once they completely rotted, though suffocation due to respiratory paralysis was likely to occur first. This process took about 950 ticks, or 19 in-game hours. They also couldn't be stunned and felt no pain or fear. A wounded scorpion would never stop fighting until it was dead. This meant that despite its relatively moderate size, the giant desert scorpion was able to one-hit-kill all creatures with blood and a nervous system, that is, most creatures. Yes, a giant desert scorpion could and would kill an elephant, giant or dragon if it got in melee and had the time to sting before getting killed.

They were also famous for their ability to wrest the weapons (or backpacks, or socks, or armor, or whatever item struck their fancy) you or your dwarves wielded out of your hands (thanks to the UPPERBODY_PINCERS possessed by scorpions) and proceed to brutally kill you with them. They had also been reported to shoot crossbows in the object testing arena.

Giant desert scorpions could be captured in cage traps and trained into pets, being the most valuable animals (tied with giant cave spiders) in the game that weren't cave dragons or megabeasts. Products made from their parts were 4 times more valuable than those made from normal animals, and they gave a decent amount of meat and fat when butchered, but most players would lean to the thought of breeding these beasts for the purpose of fortress defense. Stuffing a cage with thirty scorpions and releasing them all at once right next to unsuspecting goblins during an invasion was a joyous sight.

Giant desert scorpions were removed from the game in version 0.42.04, with plans for a replacement in a future update. Players who can't wait that long can add the old version back in by installing this mod.

Some dwarves liked giant desert scorpions for their tails. 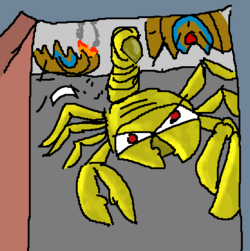 Admired for their tails.

It is said that to this day, you can still hear dragons complaining about them being removed.