A person with the head and legs of a tick.

Tick men are humanoid versions of the common tick and a species of animal people, found in most savage biomes in small clusters of 1-3 individuals. They are only half the size of an adult dwarf and as such, are unlikely to be a threat to even an unarmed civilian. Like their vermin counterparts, tick men drain blood during bite attacks, which may lead to interesting scenarios if one attempts to bite a vampire. All tick men are born with Legendary skill in climbing.

Like other savage animal people, tick men may occasionally join civilizations, becoming full-fledged citizens who may appear in your fortress as visitors or be playable in adventurer mode.

Some dwarves like tick men for their ability to expand.

A tick man with blue pigmented skin and high muscle mass has been seen traveling with a moth man. 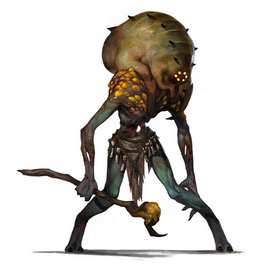 Has a harder time embedding itself into others.
Retrieved from "https://dwarffortresswiki.org/index.php?title=Tick_man&oldid=287205"
Categories:
Hidden categories: