A medium-sized, walking red panda with arms and a tail. It prefers the forest and its beloved trees.

Red panda men are animal people variants of the common red panda, found in savage temperate forests. They spawn in groups of 5-10 individuals and are generally content in keeping to themselves. Unlike their animal cousins, red panda men aren't restricted to eating just bamboo, though they'll only appear in areas where bamboo grows. In terms of size, they are a little over half the weight of the average dwarf.

Like other savage animal people, red panda men may occasionally join civilizations, becoming full-fledged citizens who may appear in your fortress as visitors or be playable in adventurer mode.

Some dwarves like red panda men for their large striped tails.

Contrary to popular rumors, there are no known records of a human woman transforming into red panda woman. 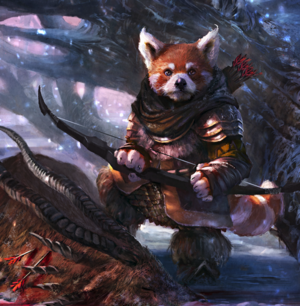