Giant moles are creatures found at the first two layers of the caverns, who'll come to your fortress and attempt to steal your food and drink your alcohol, and so should be kept away from your food stockpiles. While large, giant moles are benign and will not start fights on their own. However, due to their thieving disposition, dwarves will react aggressively to their presence and often attack them on sight. Caution should be taken if a giant mole enters a populated area, as they can cause significant damage in the event they fight back. A giant mole infant is called a giant mole pup. Despite the fact that they are members of Eulipotyphla, they have teeth like a rodent.

Due to their thieving behavior, giant moles are easily lured into traps by using food stockpiles as bait. If captured in cages, they can be trained into valuable pets. However, due to their very short lifespan, giant moles make poor long-term companions to dwarves and are better off being sold away or butchered for a nice amount of returns. Products made from giant mole parts are worth twice more than those made from common domestic animals. 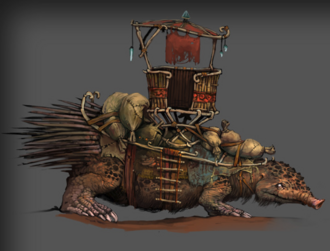