Ettins are a species of massive, two-headed semi-megabeasts. They inhabit caves and may attack your fortress once it reaches a certain amount of wealth.

Rampaging ettins will destroy buildings and tear through unskilled dwarves with impunity thanks to their great strength. The most notable characteristic of the ettin, compared to a giant or cyclops, is the fact they have two heads, meaning more than one decapitation is required to dispose of them. Additionally, ettins are immune to stunning and will usually continue to fight even if they lose one of their heads, though they aren't immune to pain and can be slowed by it. Treat an ettin as if it were a stronger cyclops and prepare yourself accordingly.

Despite their huge size, ettins can be easily captured in any cage trap. Since they are intelligent, dwarves will not attempt to eat or make products out of them, limiting their use to live training or to serve as decoration for one of your rooms. 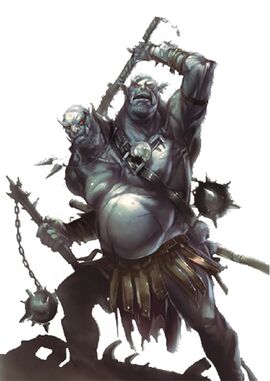 Double the heads, double the anger.

Ettins also seem to have an affinity for clothing-based weaponry, as was documented by a certain bearded bastard dwarf as he saw an Ettin with a pair of trousers bashing in the heads of a few dwarves. It led to some dwarven blacksmiths and clothesdwarves questioning the head-splattering efficiency of pants in combat and their popularity among beasts.

It is well known that ettins have difficulty reaching any kind of consensus. There are rumors of a three-headed ettin, that took so long to decide whether or not to kill its prey that said prey could easily escape.