Giant cave toads are large creatures found in caverns, inhabiting the first and second layers. They spawn one at a time, wandering the underground all while terrorizing crundles and harassing dwarves who they encounter in their path, sometimes causing heavy damage in the process - giant cave toads are over three times larger than the average dwarf and are very aggressive, though they generally do not fare well when facing a squad of equipped military dwarves.

Giant cave toads are building destroyers and will attempt to topple furniture they come across, which can be exploited to easily lure them into traps. They may also be seen being ridden by goblins during sieges, where they will gleefully swim over any moat you are using as a defense - whether their riders survive the trek is another story.

Giant cave toads can be captured with cage traps and trained into valuable pets. If a breeding pair is obtained, they can be used for a fortress' meat industry as they produce a steady supply of meat, bones, fat and prepared organs, with their products being worth 4 times more than those of standard animals. Unlike toads in real life, Giant cave toads do not lay eggs. Giant cave toads reach their full size in 2 years, and should preferably be butchered at that age for optimal product returns.

Prior to version 0.42.04, giant cave toads were simply known as "giant toads", though this was changed with the introduction of giant variants of above-ground creatures.

Some dwarves like giant cave toads for their strength. 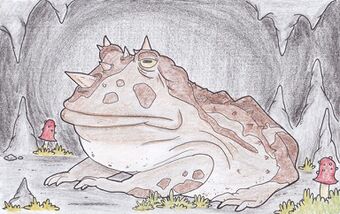